I was dipping into the literate source of Donald Knuth's TeX.web when I came upon this 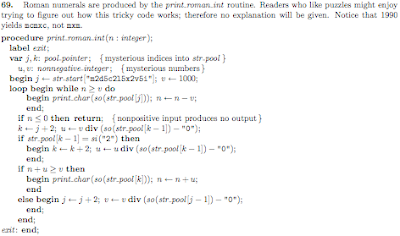 The TeX.web source that generates this snippet looks like Listing A.


I converted Knuth's original Pascal more-or-less directly into C++, except that this version returns the Roman numerals as a string rather than printing them, which makes it referentially transparent and easier to test.

The wikipedia article on Roman numerals shows this table:

From this table a pattern is fairly easy to see and I wrote my own version shown in Listing B (like Knuth I didn't include over-barred numerals, though they would be just as easy to add).

And then I checked my version against Knuth's and found the two functions produce identical results:

I enjoy reading bits and pieces of Knuth's literate code, such as TeX and Adventure. Knuth's commentary can be interesting and the code looks quite beautiful in its typeset form. But I'd prefer to be working with code like that in Listing B rather than that in Listing A, principally because I can readily understand B whereas A requires a lot more effort. I guess, as he hints in the comment, in this case he just wanted to have fun with some tricky code; he’s produced a kind of domain-specific language interpreter in a dozen or so lines of code. (I love code.) But it’s not just the choice of algorithm I’m uncomfortable with, it’s the WEB source code itself.

I have not written any code using Knuth’s literate programming tools but from what I’ve seen of what others have written I think that WEB sources are less readable than plain sources.

Here is a fragment of the CWEB source for Adventure:

The way the code is kind of lost in all the words and CWEB command codes and verbose section names, the way the structure is lost when some code is jammed up to the left margin, the way all the variables seem to end up global (how do you keep track of scope?), I just don’t like. And those goto labels all over the place! I really don’t know how you keep the structure in your head. I think I must be very visual: I need to see the structure on the screen.

Perhaps I’m mixing up all literate programming with the specific examples I’ve looked at; and anyway I might find it just as hard to read Mr. Knuth’s code if it was written in plain C. It’s clear that we are all different and we don’t all share the same coding style. And thank goodness for that! As I say, I haven’t worked with any literate code, just read some. So my opinions are just first impressions. Perhaps if the reason for the code is primarily to be typeset for exposition, the ugliness of the source is a price worth paying. But for ordinary working-class code I'd rather read and write plain idiomatic native code - but code written with care.