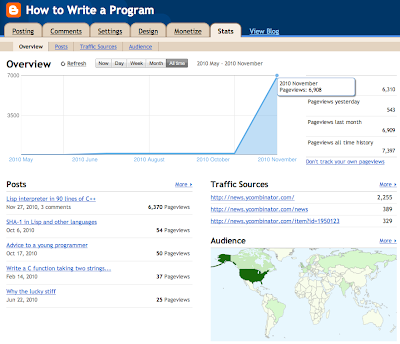 When I got home tonight I had a really nice surprise waiting for me.

Thank you everyone who took time to read the post, and especially those who commented on or linked to it.

It looks like my 15 minutes of fame - sort of - is drawing to a close now. Here are a few recent graphs in case they are of interest to anyone else.

This one is awesome: if I understand it correctly, three people found my blog by putting "C++" into Google! Bjarne Stroustrup's blog, yes. But mine?! I just tried it but I couldn't see it on the first few pages. They must have been very patient:

Seventeen thousand people stopped by and no one left a rude comment. (I think there's a remote possibility a few people went back to their own communities and left rude comments there.)

Lisp interpreter in 90 lines of C++: I lied right there in the post title: I could be in advertising. I hope people forgive me. It's been a fun new experience for me.

It's been a month since the post was published so I thought I'd write a little more about it. To date the post has had 17,423 page views (way more than it deserves); the blog has had 19,382 page views in total. Prior to the post it had just a few hundred page views total.

I did toy with the idea of developing the code further. I added tail call optimisation as described in Peter Norvig's second article. I also tried to fix the memory leak by replacing the raw pointers with boost::shared_ptr. This reduced the memory leak but didn't eliminate it. I can't work out wether garbage collection is unavoidable or not, but I assume it is. The leak was not eliminated because there were situations where there was a sort of circularity of references. e.g. in (define leak (lambda () (define f (lambda () 0)))) where f is a lambda that references the closure in which f is defined.

In the original article I said the code was inefficient. Having reduced the memory leaks I wanted to give some idea of just how inefficient the code is. I adapted this example of the Sieve of Eratosthenes from rosettacode.org (once again I've shown the code formatted for readability; you have to enter each procedure on one line)

I didn't bother timing this, but it must have taken about an hour of 100% CPU and peak memory usage of around 50 MB. I must have produced the most inefficient Scheme interpreter ever. (In contrast I found and compiled TinyScheme, which performed this same task in the blink of an eye. Interestingly, TinyScheme is a not-so-tiny 4,500 lines of C.)

Actually, I was hoping to find something "real" I could do with the interpreter, but wasn't able to - probably a lack of imagination on my part.

So if you don't like what I'm saying about about C++, go become an expert at a better language (I recommend Lisp), and then you'll be armed to disagree with me. You won't, though. I'll have tricked you. You won't like C++ anymore, and you might be irked that I tricked you into disliking your ex-favorite language. So maybe you'd better just forget about all this. C++ is great. Really. It's just ducky. Forget what I said about it. It's fine.

I'm pretty sure that the only way I'm going to really learn Scheme is to commit myself to writing a non-trivial application in that language.

It'll be one of my New Year resolutions.